Ricky, our adopted son from Cuernovaca, Morelos, Mexico, joined our family in May 1989. He is a definite "miracle kid", born 2 1/2 months premature when his birth mother suffered a major brain aneurism bleed and died on the way to the hospital. On a teaching trip to Cuenovaca, I met a delightful bright eyed little boy named Ricardo. He became the answer to Stefanie and Ann's persistent yearning for a little brother after mountainous paperwork and seemingly insurmountable obstacles. The Good Lord must have meant this child to live and give powerful contributions to other's lives both in Mexico and here. He is a sunbeam of a child most of the time.

Ricky officially became a Hylton in May, 1990 and a US Citizen in Jan. 1994. He currently attends 8th grade at McKnight Middle School in Renton where he is in a combination of self-contained and inclusion classes focused on academics and pre-vocational skills. Because he has cerebral palsy, Ricky uses a wheelchair to get around school and a computer as his pen and paper. Ricky loves music and singing. Stefanie has converted him to "Oldies 93.7" local radio and Ann to "Young Country". He is an avid Sports Fan of the Seattle Seahawks and Mariners. He always gives much more than he asks!

Of course we are fast moving into adolescence with all of it's energy and challenges.

Last year Rick changed his name (Ricky -> Rick). He will enter Hazen High School in Fall, 1999. He joined a Boy Scout troop last September with immense positive and self-esteem building in this year of many changes. We have also joined the realm of wheelchair sports with Rick's participation this Spring in Wheelchair Track and Field ("Racing") events connected to Special Olympics. What a superb positive energy-giving program this is! This Summer brings experiences with YMCA teen day camp in the same after school program he will join in the Fall and two week long overnight camps. 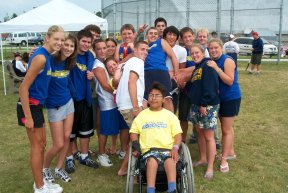 Rick continues to enjoy High School. He is in a program focused on daily life skills and job skills training. He will remain a Junior until he reaches 21 years of age, the year of his graduation. He continues to swim four times a week and is participating again in Special Olympics Track and Field this Spring. He is involved in the YMCA after school program where he volunteers as a helper for elementary age children.

He attended Sports & Arts SPECTACULAR last summer with Dad as a helper (This is a program high school students through our church which brings over 1,000 kids together at Graceland University in Lamoni, Iowa). He plans to go again this Summer with the Pacific Northwest Delegation.