Welcome to the Hylton Family 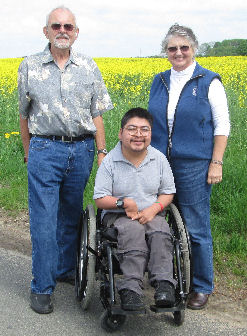 ADAD welcomes you to his WWW site.

My wife, Nancy and I , Dale seem to keep our home here in Seattle, Washington full whether it is our own children or our exchange daughters and sons.

This is the Last family picture.

A good church friend, Christine Sargent, introduced us to YFU when we met her exchange students many years ago. Thinking our lives were already " too busy ", we never accepted her suggestions to have an exchange student. When the call came from Chris that Karina needed a home in January 1989, we had an empty bedroom available, ready for Ricky (but no Ricky!) Our family did not think twice about accepting this young woman into our home 2 days later and our adventure with YFU and teenagers from around the world began.

An extra teenager in the house was not so much more work! With Chris as our Area Rep., the journey has been delightful for Dale and me. We have really become "addicted" to teens! We have had the amazing privilege of meeting the parents of all but Sarah, Humberto and Ayumi.

Each of our exchange daughters and sons has met another of the exchange kids; Karina met Ulrike when she returned to visit with her Dad, Sanna met Humberto and Ulrike when she returned to Seattle on 2 occasions, Ulrike and her family met Tanya as she was arriving from Russia and their plane was leaving for Germany, and of course Ayumi and Tia, and Sarah and Ivan have lived together.

Ulrike also met Ivan and Sarah when she returned to Seattle for 2 months to work with the Greenway Project. Mila met Ulrike in Brasil when Ulrike was there on vacation. Likewise, Mila has had the opportunity to meet Ulrike's parents when she joined us for a vacation in Germany. Marlene went home via a trip with us to Europe. She was able to meet Mette and Ulrike. Annelies and Sanna met the summer of 1999 when Sanna, her mother and her brother paid us a visit. Valentina met Tanya in the summer of 2007 when Tanya, her son Gene, & her mother paid us a visit.

Over time, and after 24 sons/daughters, the combinations are endless. So many of our kids have returned home for a short stay. Thus I cannot list all the meetings. It is wonderfull that they are able to meet their other sisters or brothers.

One of our traditions is to take a family picture each year. Most were taken just before Christmas. Each picure is proudly displayed in the hall of our home. The Family Slideshow can be found here


Listed below is more information on our wonderful kids. Just "click" on their name to go over to their page. We would do it again only this time sooner!

I have two cams. The backyard cam belongs to my friend, Tom, who is kind enough to let me use it.

YFU has a nice WWW page explaining their program.

My Oregon Scientific Wireless Weather Station is outside.

If you have a moment, we would love to hear from you. Thanks for visiting "ADAD's Place"